The Sila National Park is an especially mountainous park, where the woods occupy 81% of the total area, while the pastures affect 4% of the total area. It is characterized by the massive presence of beech (35% of the forest area) which mainly affects the higher areas and the pine forests (43% of the woods) in vast flat areas or on slight slopes that characterize the plateau. In Sila Piccola, the mixed beech-fir woods of Monte Gariglione and Monte Femminamorta are particularly important from a historical-cultural and vegetational point of view.
In Sila Greca the populations of oaks (above all, Turkey oak and farnetto), locally mixed with maple and ash trees and other deciduous trees, are of particular importance. In the Pre-Sila of Catanzaro, where the territory of the Park falls to modest proportions, there are coppices and chestnut groves, holm oak stands, locally mixed with cork oaks and reforestation of Mediterranean pines. Typical of the whole area of the Park are also the poplar groves of tremolo, especially in areas covered by fires, and the formations of black alder along the waterways. 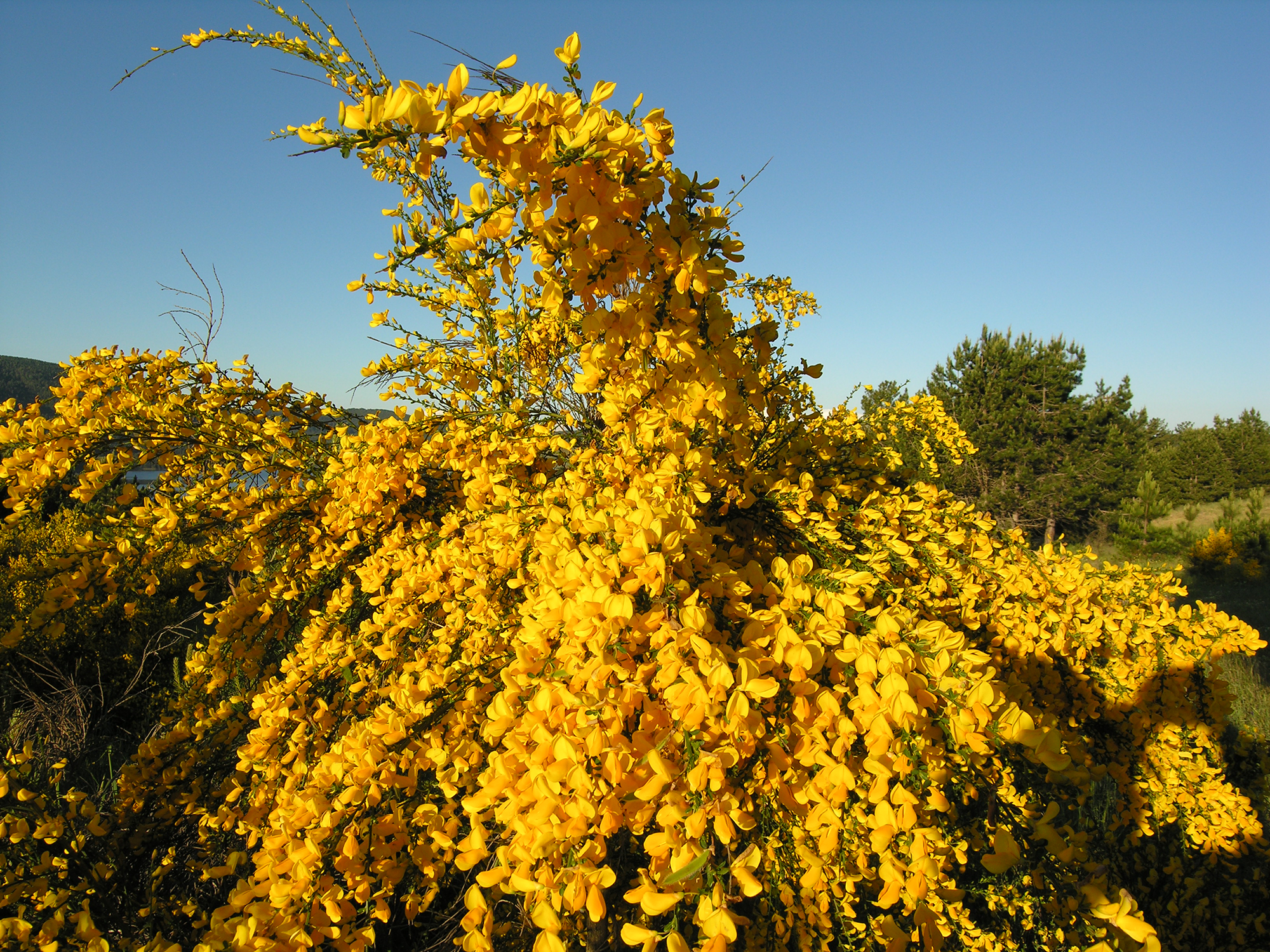 The available studies allow to estimate the flora of the Silane plateau in about 1,200 taxa between species and subspecies, belonging to 440 genera and 90 families. In Sila we find almost half of the flora present in the Calabria Region, estimated at 2,629 entities. This figure highlights the high floristic richness of these territories due to the diversity of habitats and the peculiar paleogeographic and paleoclimatic events that have affected the Silane plateau. Among the species present there is an abundance of Mediterranean elements (about 30%), followed by Eurasian species (23.2%). The presence of northern (17%) and European (10.3%) species is significant for a territory at the center of the Mediterranean. The endemic taxa, between species and subspecies, are over 90 and represent 8% of the total flora, a percentage comparable to that of the other mountain systems of southern Italy. From the floristic point of view the Sila is considered by the scholars of the sector as one of the areas of the Southern Apennines where the endemistic rate is the highest. Among the Sila endemics, a prominent place belongs to the laricio pine or black pine of Calabria (Pinus nigra subsp. Calabrica), which characterizes most of the Sila woods.

The valuable heritage of a territory flora is represented, in addition to the endemic species, from those species at the area limit and more generally from those rare and localized species. These are the species that contribute to characterize the territory under the floristic and phytogeographic profile and that express its importance and naturalistic value: in the territory of Sila this quota amounts to 89 taxa.

From a phytogeographic point of view, the Sila vegetation is very unique because it is endemic or endemic as redards the area limits, which reflect the paleogeographic and paleoclimatic specificity of this territory. These phytocoenoses are a refuge for a rich endemic flora.
From the forest point of view, the Sila is characterized by pine forests of laricio pine, mixed woods of larch-beech pine and, on more limited surfaces, by beech populations. The areas set at altitudes between 801 and 1200 m (22%) are mainly characterized by reforestation of larch pine, mesophile oak formations and, subordinately, by chestnut coppices. The areas that are between 1601 and 2000 m (10% of the total area) are beeches, locally mixed with fir. The latter placed at altitudes of less than 801m represents just 2% of the total area and some zones of the Pre-Silan area: these zones are dominated by chestnut coppices and mesophile oaks and, on small surfaces, by coppices of evergreen oaks. On the plateau the shrub formations are less widespread, which concern a stage of the dynamic series of beech and laricio pine woods. These are shrub formations linked to a temperate bioclimate, which rapidly colonize former crops and unused pastures. They also include the forest mantle of broad-leaved woods (oaks and beeches). In these bushes there are also some endemic species such as Viola messanensis and Polygala alpestris subsp. angelisii and pink viscose. Particular highlights of the Silan landscape are the vast areas that occupy herbaceous vegetation with a mosaic of dry and wet pastures that alternate in a complex mosaic in relation to water availability and depth of the soil. These pastures are a fundamental stone for livestock breeding that is traditionally consumed on the plateau. The Silane dry pastures host a rich contingent of endemic taxa from southern Italy such as Phleum ambiguum, Bunium petraeum, Hieracium macranthum, Silene sicula, Koeleria splendens subsp. brutia, Petrorhagia saxifraga subsp. gasparrinii, etc. The vegetation of the humid pastures, frequent on the wide depressed surfaces, flat or almost, characteristic of the Silan plateau, is of a purely European type and has here the extreme south of its distribution.

The considerable water availability favors a series of specialized wet environments that host the diversified hygrophilous, aquatic and marsh vegetation. The nemoral hygrophilous vegetation develops along the watercourses shaded by forest formations such as beech and ontan. It hosts a rich contingent of phytogeographic interest species such as Lereschia thomasii, Chrysosplenium dubium, Chaerophyllum hirsutum subsp. calabricum. In the marshy areas with constant waterv stagnation we can find a hygrophilous vegetation with different helophytes in various marsh associations, while at altitudes above 1,400 m there are wet depressions whose ecological characteristics favor the formation of sphagnum peatlands that represents shelter stations for many species with northern distribution like Carex stellulata, Potamogeton polygonifolius, Veronica scutellata, Potentilla erecta, Viola palustris. Most of the artificial lakes shores in the Sila National Park are subject to periodic seasonal fluctuations of the coastline. In some cases there is the temporary drying up of extensive basin surfaces with the emergence of muddy and humid alluvial soils, which are colonized by phytocenosis to hygrophilous terophytes, which are sometimes accompanied by small hemicryptophytes and geophytes. In this vegetation there are some singular species of migrant hygrophilous species such as Limosella aquatica and Schoenoplectus supinus, with disjoint populations located at the southern boundary of the areal. The submerged phytocoenosis and vessels present in the lake basins can be classified in an endemic alliance of Calabria and Sicily characterized by the dominance of prostrate rizoelophytes and submerged rhizophytes such as Alopecurus aequalis, Glyceria spicata and Lytrum portula.

The origins of the Sila plateau can be traced back to a geological era much more remote than that of the Apennine orogeny.

The Silane landscape is the result of the particular physical environment, varied and poorly tormented, on which it adapts a diverse fauna, a complex vegetation and a moderate human presence, which constitute interacting systems. It highlights a plurality of landscapes ranging from mountain to hill and flat, divided into alluvial, valley and terraced areas.

In the forest landscape, endowed with a high biodiversity, there is a wooded heritage, of considerable provisions and of considerable ecosystem value, which must consequently be adequately safeguarded and conserved.

There are marginal territorial areas, neglected by modern development processes, where there are sites in which resources and values have been preserved in substantial integrity.

The same must be used in optimal ways by local communities in order to favor their recovery, stability and duration.

The agrarian landscape is more specifically the result of an interaction between man and the environment, in continuous becoming above all as a consequence of the changing social conditions, but also of the cultural evolution and agricultural technique progresses.

The agricultural landscape of the Sila has been poorly modified by the technological impact and this has prevented the human needs from taking over the characteristics that the natural environment had preserved over the centuries.

Agriculture is still largely traditional, managed to preserve balance and maintain its characteristics, avoiding significant genetic erosion and substantial falls in diversities. The growth process of human settlements in rural and peri-urban areas was moderated in most of the sites. In any case, it is necessary to keep under control any excesses of anthropic pressure, regulating the land use and transformation trends, protecting the areas with a strong naturalistic and environmental value and diversifying times and ways of enjoyment. Ultimately, we have to favor the integration of the development processes with the particular peculiarities of the areas involved, developing a suitable design that will enhance the Sila landscape resources while improving the valuable functions that are already held in due consideration. Good results can be achieved with the implementation of appropriate policies for territorial rebalancing and social cohesion. The aim is to continue to ensure that travellers visiting the Park can still admire a largely primitive, intact, attractive and evocative landscape.

In the Park there are the most significant species of the Sila area which, with its splendid blooms, mainly in spring and summer, integrate the green of pastures and surrounding woods, creating a pleasant and relaxing landscape suggestion and highlighting its enormous naturalistic importance. In springtime the first flowers that appear are the saffron, the forget-me-not, the primroses, the cyclamens and a colorful multitude of violets. With the season advancing the blooms of various species of orchids explode, among which we can admire the bird's nest orchid, buttercups, anemones, muscari, gladioli, daffodils, nasturtiums, crocuses, alissi, lilies, geum, mallow, myosotis, veronica, thyme, bluebells, verbenas, origanum, mint, chamomile, anise, and others. Among the last to bloom, before the advent of the winter season, there is the colchici; with the autumn ending the blooms, the spectacular and iridescent coloring of the broad-leaved vegetation is highlighted, contrasting with the splendid green of the laricio pine and the white fir. These are singular cenosis favored by the siliceous soil and the Mediterranean climate, made mild thanks to the influence of the nearby Ionian and Tyrrhenian Sea. 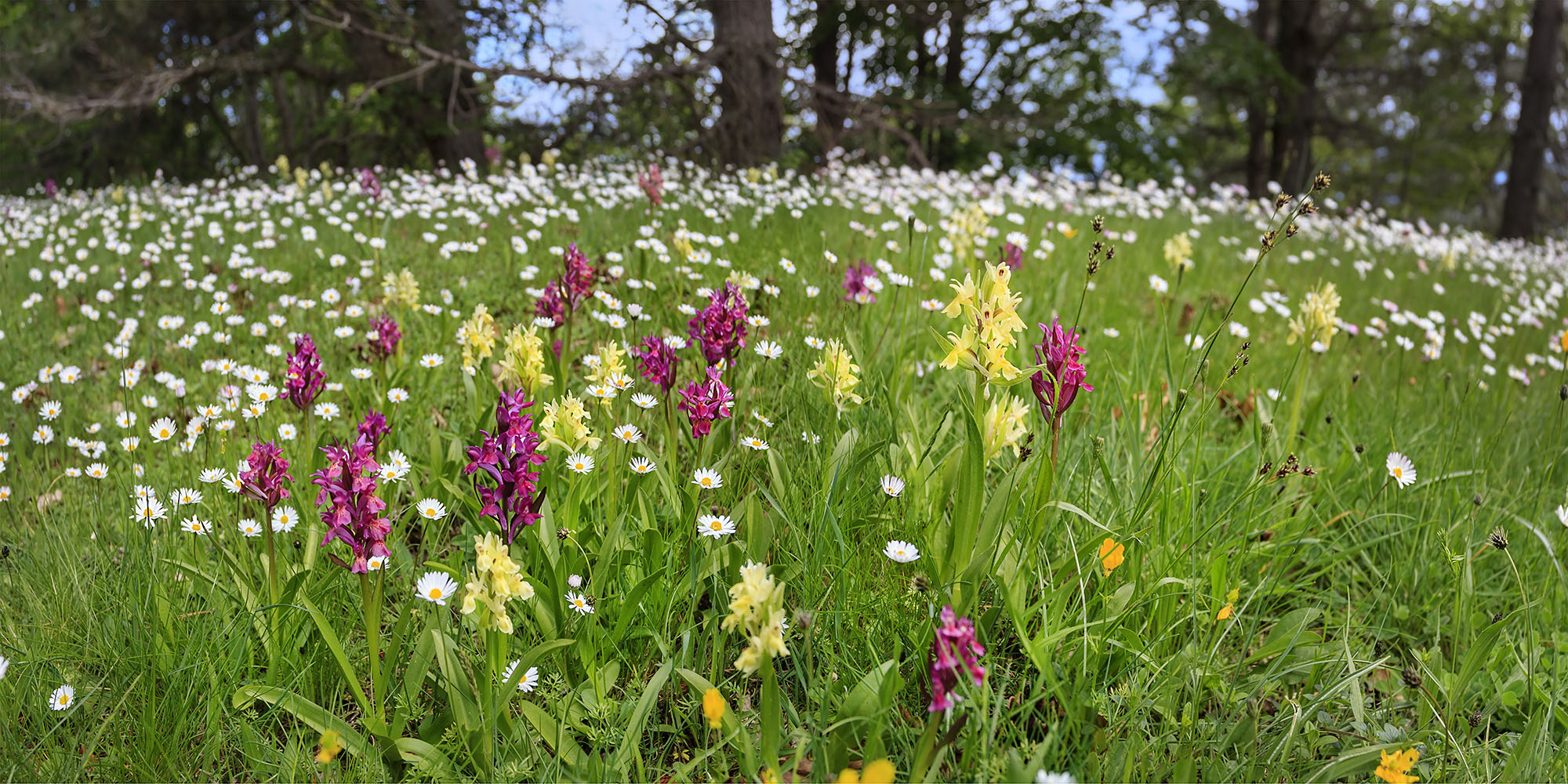 In the Park it is forbidden to collect and damage spontaneous flora, except in areas where agro-pastoral activities are permitted and in compliance with local civic use regulations.